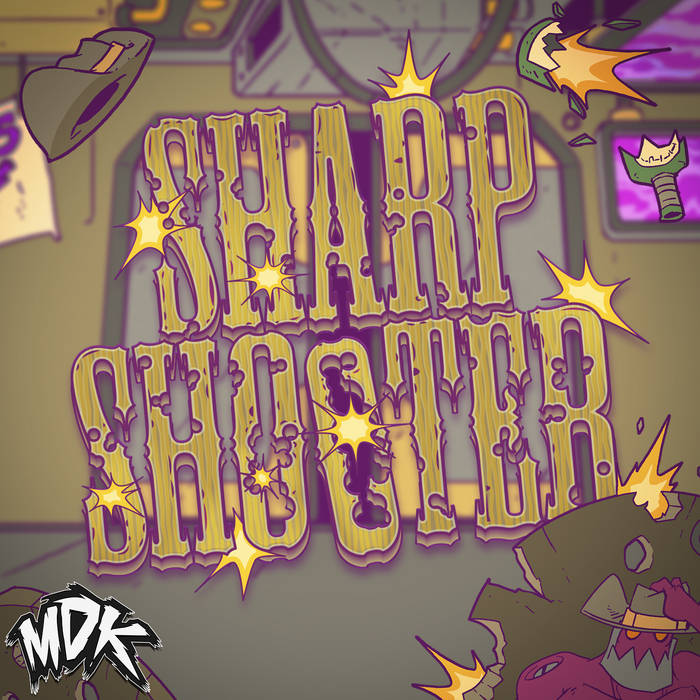 The leader of the Corsair army glared at his reflection in the mirror of the captain’s quarters, with a sour look of contempt plastered upon his face. Gone were his beloved loafers, khaki slacks, and sickening floral shirts, unfit for even the cheapest of cruises. Instead, they were replaced by an ill-fitting cowboy costume and some very deep feelings of regret. The Corsair next to him was having a very difficult time keeping a straight face, feebly attempting to hide fits of hysterical giggles.

“Just so we’re clear – if today was any other day, I’d absolutely have killed you by now” grumbled Smooth Jazz. “Fortunately for you, destroying that gargantuan pile of green garbage has put me in a strangely forgiving mood.”

“Oh, come on boss. Have a little fun! It’s...uhh...national space-cowboy day? Slick Rick’s even got a special menu for us to try out, YEEEHAWW!”

Selectively ignoring his master’s harsh words and judgmental gaze, the enthusiastic purple demon leapt into the air, throwing out finger guns like no tomorrow.

“Look, I’m here, aren’t I?” grumbled Smooth Jazz, his fist clenching tighter by the second. “You jelly-brained idiots got me to show up to your ‘totally-legitimate-holiday’, isn’t that enough? I swear, if this is another energy drink pyramid scheme, I’m throwing you and all of that damn Super Ultra into the incinerator.”

The walk to Bay 3 from the captain’s quarters takes exactly four and a half minutes, and Smooth Jazz utilized every last one of those two hundred and seventy seconds to explain where he’d rather be at that particular moment (TL;DR – literally anywhere) With a vocabulary as colorful as it was creative, he did his best to rain on his cohort’s parade. But try as he might, his insults seemed to have no effect on the eager Corsair.

“Thick skin, and even thicker skulls” he mumbled under his breath while reluctantly trudging forward. Slick Rick’s Bar was only a few steps away, and it seemed the writing was on the wall for how Smooth Jazz was going to be spending his evening. “You Corsairs don’t even have enough brainpower to realize that you’re complete idiots”.

The doors opened, revealing the tacky eyesore the bar had become overnight. Cheap decorations covered every surface, as though Rick had won a shopping spree at the local dollar store. Everything from the faux cacti, to the crudely made “CONGRADULASHUNS” sign – the Corsairs had spared every expense.

“SURPRISE!” cheered the Corsair, as the lights flickered on and a dozen other scaly soldiers popped up from various hiding places. Slapping a cowboy hat onto the head of his momentarily-stunned boss, he continued his speech. “Congratulations, sir! This is your victory party for taking over the Jelly Castle! We used up…well pretty much the entire budget that we had left, but I know you’re going to lov—”

Lashing out with his fist, Smooth Jazz caught the unlucky Corsair directly in the throat, immediately stopping the vexatious string of verbal diarrhea spewing from the creature’s mouth. “You spent the party planning budget on this? THIS? T H I S? Where’s the live band, the cigars, the ladies? RICKY MY BOY, YOU’D BETTER TELL ME YOU’RE STILL SERVING CRUSTY TRUMPETS BACK THERE!”

“We ain’t servin’ the typical menu tonight, boss!” answered Rick. “Can I interest you in a Venomous Varmint, a Raunchy Ricochet, or perhaps a lovely bottle of Black Water—"

“ARGHHHH! This. Party. Is. TERRIBLE. I’d rather collab with the Warrior of Wubstep than be here with you idiots!” screamed the furious fanatic of funk. With a surprising amount of flexibility for someone who wears loafers on a daily basis, Smooth Jazz lunged forward and booted the nearest Corsair into the air. He reached behind his back and withdrew the pistol he had tucked into his waistband.

Fearing that their master had finally snapped, the rest of the Corsairs sprang into all-out panic mode. Tables were flipped, and drinks sailed through the air as Smooth Jazz unloaded an entire clip of bullets into the room.

“Now clean up, and GET BACK TO WORK!” he screamed. “We’ve got a lot of loose ends left to tie up, and someone figure out where that damn Phoenix went!”