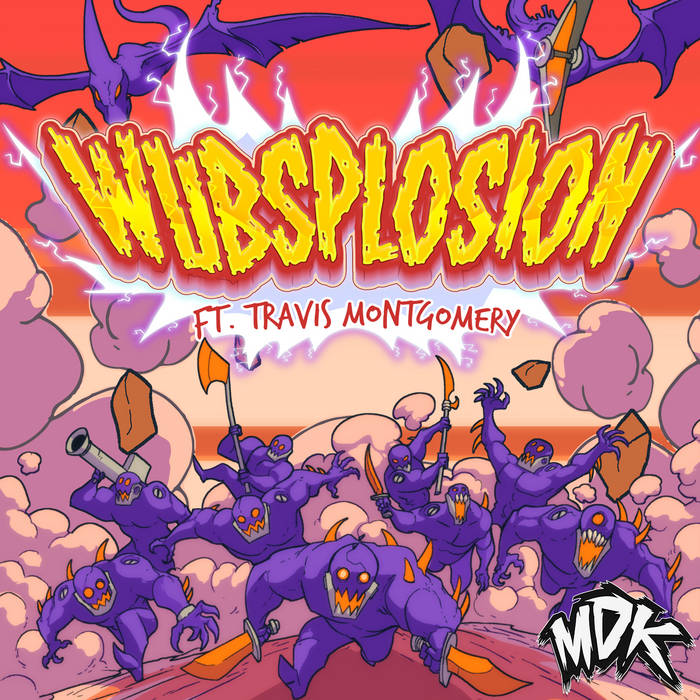 With the look of defeat plastered upon his face, the Warrior of Wubstep began to take in the reality of his surroundings. The Jelly Castle, once a glistening, green beacon of hope, was now nothing more than a molten heap of goo. Chaos had broken out amongst the few surviving townsfolk who were fleeing the scene in a panic. With the Corsair army drawing closer by the second, there wasn’t even time to mourn those who had fallen in battle.

The sound of ten thousand scaly feet trampling the soil reverberated across the land as the horrific drone of shiny, brass instruments began to crescendo into a deafening roar. The second wave of demons had nearly arrived, led by their nefarious master, Smooth Jazz; The Mustached Maestro-of-Mayhem. A shady saxophonist from outer space who despised wubstep even more than the Intergalactic Top 40, and was hell-bent on eradicating the genre from the galaxy.

The Corsairs viciously charged forward, and the remaining forces of wubstep were defenseless against the onslaught, without the Phoenix to protect them. Only one option remained - RUN. Grabbing his weapons, the Warrior of Wubstep began to retreat, heading for the nearby mountains where he hoped the Corsairs would lose his trail. In spite of his best efforts, however, the fatigue of battle was quickly catching up and the mountains weren’t getting any closer.

With his lungs burning like Hellfire and leg muscles succumbing to exhaustion, the warrior began to make peace with his fate. Outrunning the Corsair army wasn’t an option, but facing his enemy and dying a hero’s death was certainly still on the table. His footsteps slowed to a halt, and he turned to embrace what would surely be his final battle. Corsair soldiers began to circle the exhausted hero, encasing him behind a wall of purple scales & rotten flesh. Licking their lips, they raised their weapons and chanted in unison, “WUBSTEP IS DEAD! WUBSTEP IS DEAD!”

Feeling overly confident, as villains in poorly-written fiction often do, the Corsairs paused to revel in their victory; prodding and snarling at the trapped warrior. In fact, they paused for precisely the amount of time it takes for a self-centered, decrepit old wizard to begrudgingly stop playing his Super Wubtendo and come to the aid of a fallen warrior…

A raspy voice cried out from behind the warrior, followed by a violent current of electricity crackling through the air. The Warrior of Wubstep stared in bewilderment as his body became engulfed in a protective, blue aura, and a peculiar-looking old man appeared at his side. The man had a grizzled face, and long, unkempt hair resembling that of an overused dollar-store mop. He carried a gnarled staff and wore a set of very unflattering wizard’s robes. A mysterious quality seemed to emanate from the man, but it was less “magical wizard”, and more “your weird great-uncle that you’re forced to see once a year”.

“Listen up, we haven’t got much time!'' barked the haggard-looking wizard. “I can hold these purple butt-brains back for a few minutes, but we really need to be making an exit right about now.”

Clutching his staff tightly, the wizard pointed it directly at the Corsairs. He closed his eyes and began to mutter, “Win..gardium..levio…wub..sa? No, no, that’s not it. Expecto-WUBTRONUM! Gahhh! Think, Dumbledalf, think! OH, yes, of course! WUUUBSPLOSION!!”

A violent Shockwave erupted from the end of his staff as he uttered the spell, instantly vaporizing the nearest Corsair soldiers. Saxophones, weaponry, and dismembered limbs filled the air as the monsters were eviscerated by the blast. While not powerful enough to make a true dent in the Corsair ranks, the Wubsplosion had certainly done its job. The demons closest to the wizard were now piles of purple sludge, while the rest reared back, temporarily blinded by the shockwave and cowering on the ground in fear. Seeing their chance to escape, the wizard beckoned to the warrior to follow his lead, and the two unlikely companions hastily set off in the direction of the nearby mountain range.