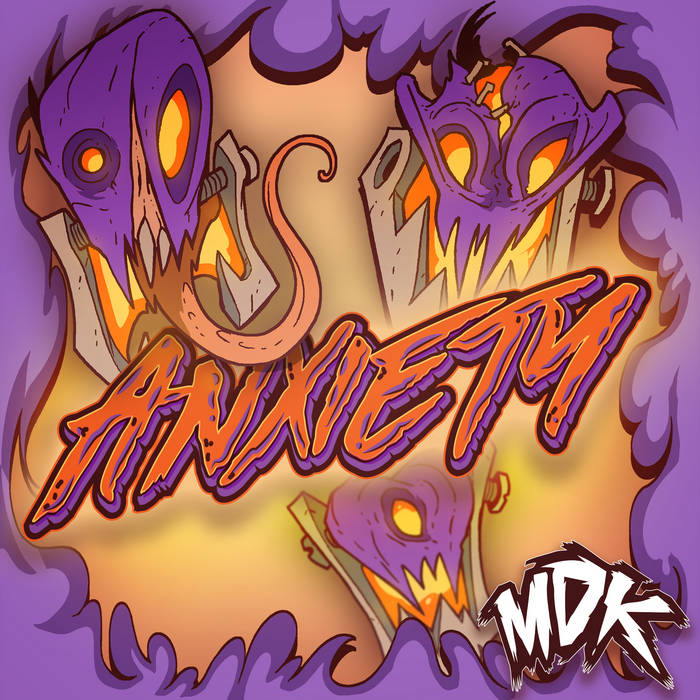 LokeYourLord The best tracks from MDK are all the super active ones, this being one of my favourites (of course the best being Press Start, then Super Ultra and Infinite)

The angry crackle of electricity pierced the night as a bolt of lightning erupted from the end of Dumbledalf's sonic scepter. It arched through the air and slammed into the tree the Warrior of Wubstep was laying against, leaving a smoldering hole inches above his head.

“Watch where you’re pointing that thing!” exclaimed the young man, glaring at his annoying ally. He covered his head with both hands as the tree violently shook from the blast, branches raining down around him. “You could’ve taken my head clean o—"

"Whoops, my bad!” interrupted the snarky wizard. "Been a while since I've taken the ol' girl out for a spin.” Without a single shred of remorse in his voice, he unapologetically blathered on. “...but now that you’re up and at ‘em, how about making yourself useful and bringing some of that wood over here?” Pointing with his peculiar-looking staff, Dumbledalf beckoned towards the sticks that lay scattered around the half-disintegrated tree, leaving his companion wondering if it truly had been an accident after all.

Coughing as he clambered to his feet, the warrior brushed a layer of splinters and soot from his armor. Peace was a rare commodity when dealing with Dumbledalf the Disappointing, a lesson that was growing increasingly apparent as the day went on. Magical mishaps were all too common around the eccentric enchanter, who seemed to blunder through life with a frightening lack of common sense or empathy. But despite the wizard’s shortcomings, the hero couldn’t deny that he owed him his life. Letting out a frustrated sigh he did as he was asked and began to collect a bundle of sticks.

The peculiar pair had been on the run for hours, fleeing from the clutches of Smooth Jazz and his mob of muculent musicians. Their frantic escape had led them to a clearing deep inside a nearby forest, where they had decided to set up camp for the remainder of the night. The morning’s goo-covered battlefield was now miles behind them, and the great Jellysplosion already felt like an event of the distant past.

As the warrior reached the middle of the clearing, he dropped the pile of branches at Dumbledalf’s feet. Fearing a second "accident" might soon be heading his way, he took a cautious step back as the wizard raised his staff in the air.

"Oh, stop being such a wuss", snapped Dumbledalf while haphazardly twirling his weapon. "It’s hard to believe YOU’RE gonna save the world if you get this bent out of shape over a few sparks and some smoke". He murmured an inaudible string of wub-filled mumbo jumbo and a small orb of fire leapt from his staff to the branches on the ground, setting them ablaze. A surprisingly mild-mannered spell for such a vexatious old man – perhaps he was capable of some level of finesse after all.

"Yeah, about that…can we rewind a little?” the Warrior of Wubstep asked timidly. “Save the world from what, exactly? Those purple demon things and that dude with the creepy moustache? What do they want from me?”

“Sheesh, the younger generation really is all about instant gratification these days, aren’t they?” groaned Dumbledalf, as he laid down on the ground beside the roaring campfire. He reached deep into his robe and pulled a stuffed unicorn from one of his many, musty pockets. Rudely yawning, he continued to scold the warrior. “Don’t you have any appreciation for developing a good plot? Suspense, have you heard of it? T E N S I O N? All you need to know right now is that they have absolutely TERRIBLE taste in music. Oh, and they will stop at nothing to kill you. Sweet dreams!”

And with that, the sour sorcerer rolled over, falling asleep in a matter of seconds as he tightly clutched the toy unicorn to his chest. The sound of his thunderous snoring was all that remained, leaving the confused warrior alone with his thoughts. Following Dumbledalf’s lead, he laid down beside the fire and closed his eyes. But try as he might, sleep wasn’t going to come easily that night. His mind began to race from one anxious thought to another as memories of the day’s events plagued his brain. Images of snarling purple demons and the destruction of the Jelly Castle were all he could see, while the horrific drone of thousands of brass instruments echoed endlessly in his ears.

A slew of unanswered questions accompanied the nightmarish visions, fueling the young hero’s uneasy mindset. Where had the phoenix gone and why had it left? Would it return, or had it abandoned its kingdom in a time of need? Where did Dumbledalf come from, and who exactly was he? Most importantly - could he actually be trusted?

The sound of another voice interrupted the warrior’s inner monologue, freeing him from his ghastly hallucinations as he returned to reality. He quickly sat up and reached for his weapon, expecting an ambush of demons to jump out from the surrounding trees. Glancing over at his companion, he let loose a sigh of relief when he realized the source of the voice. Dumbledalf, still fast asleep, was laying on his back uttering what could only be described as verbal diarrhea. He had one leg stretched out, while the other was pointed straight up in the air. How anyone could rest comfortably like that was beyond the warrior, but judging by the smile on his face it was clear the wizard was quite content.

“No, no it’s my turn to ride the unicorn…petrificus WUBTALUS…” Dumbledalf’s murmuring continued, each group of words more ridiculous, and disturbing, than the last. “…oh baby…WUBIFY...number 4 please with extra pickles…oh yeah, don’t stop…I said EXTRA dammit…”

“Well so much for learning anything useful from him” sighed the warrior, wondering if he’d simply been dreaming. Considering Dumbledalf could barely remember the simplest of things, it seemed highly unlikely that he would be privy to some secret prophecy, or powerful weapon.
...or would he?